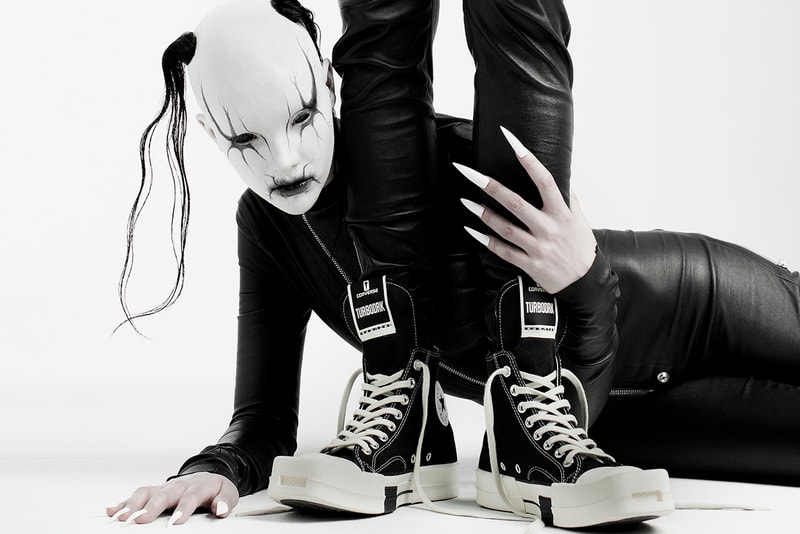 After the shoe first surfaced back in January of this year, Rick Owens and Converse have now revealed an official look at the upcoming DRKSHDW TURBODRK Chuck 70 collaboration. The stand-out feature of the reworked silhouette is its square-toe construction, the first time that it has been used on the Chuck 70.

The squared toe references the ethos that Owens has brought to the collaboration -- described as "distorting the ubiquitous" -- which continues to the extended tongue. This construction is used on versions of both the Hi and Ox cuts of the shoe, while each is available in classic black or white canvas colorways.

To mark the global launch of the collaboration, Owens discussed the design with HYPEBEAST. "I have been presenting (and personally wearing) platform boots in the past few seasons that have a square toe grill," he says of the square-toe construction. "Distorting the iconic Converse toe into this shape drew it into my current world." Going on, Owens added that his desire to "distort" comes from "a bratty adolescent attitude that I allow myself to indulge in probably more than I should." The designer also added that the collaboration was inspired by his desire to "emphasize the extremist transgression that black and white Chuck 70s have always implied."

The TURBODRK Chuck 70 also closes a circle for Owens, which began with the DRKSHDW Ramones sneaker from Spring/Summer 2014, which took inspiration from the classic Converse silhouette. "After referencing Converse in the past, there is a nice closure in being invited by them to hook up," Owens adds. "Converse introducing me to their larger audience more accessibly than I could has a synergistic logic."

Owens' collaboration with Converse is his latest joint release this year. As well as the Chuck 70 rework, he has also worked with Champion, Dr. Martens and Birkenstock. "I will be embedded into the social fabric in a new way by aligning myself with a global brand like Converse," he explains of his collaborations. "This might allow me to share my enthusiasm for a more tolerant and inclusive personal aesthetic to more people. I want to help release the freak kids the way the Converse-wearing Ramones did for me."

Take a look at the DRKSDHW x Converse TURBODRK Chuck 70 in the gallery above, in a campaign featuruing multi-disciplinary brand Fecal Matter. The collaboration will then release globally via the Converse web store and Rick Owens web store on July 27.

As well as working with Rick Owens, Converse also recently presented "The Really Cool Converse Club" with Tyler, The Creator.