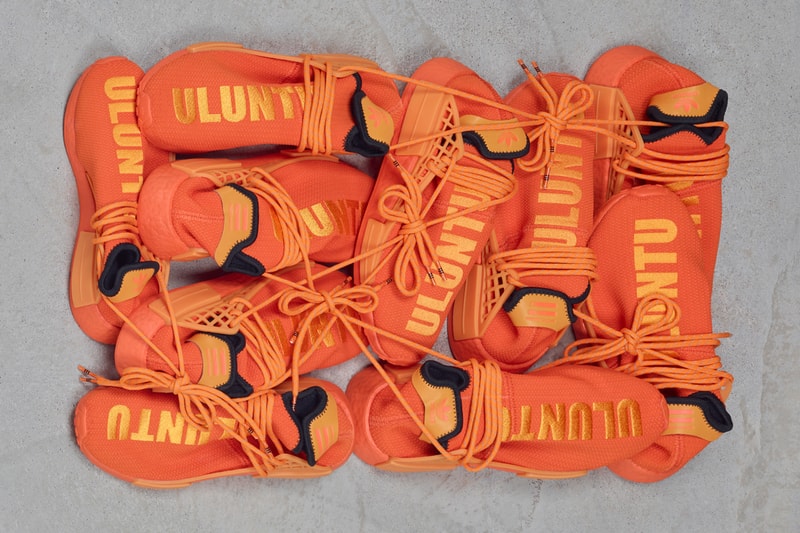 Pharrell and adidas are back with their latest NMD Hu: a citrusy orange style that's perfect for summer. With its sleek socklike construction, warm tones and comfy BOOST cushioning setup, this orange NMD from Skateboard P and adidas Originals was clearly designed with warm days in mind, and it boasts meaningful text hits to boot.

Three orange tones take prominence on the upper. The first, a standard orange, appears on the knit, sock-like base layer, while the other, a more creamsicle-like orange is used on the midfoot cage, laces, and heel tab. The last — and brightest — shade of orange appears on the upper's embroidered "Uluntu" spellout graphic. This text is Xhosa, a Nguni Bantu language that's one of the official dialects of South Africa and Zimbabwe, and it translates to "Human Race" in English. A dash of black around the collar provides some dark contrast, and an orange BOOST midsole with bright orange forefoot and heel bricks rounds off the look.

The Pharrell x adidas NMD Hu in orange is set to release via the adidas webstore on June 12. Its MSRP is set at $220 USD.

Elsewhere in the world of the Three Stripes, Sean Wotherspoon's adidas ZX 8000 SUPEREARTH is set to release in infant and toddler sizes.