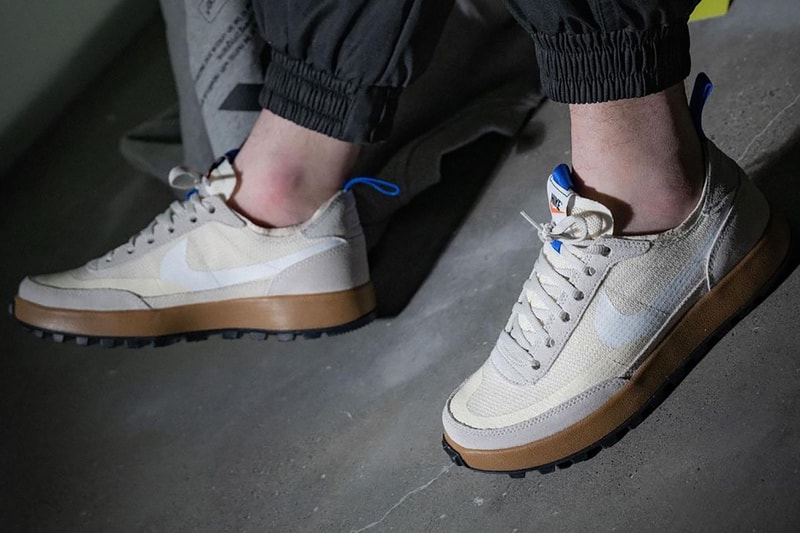 In the realm of footwear, Tom Sachs is well respected for this knack for producing striking collaborations with Nike, most notably the NikeCraft Mars Yard. While it's been quite some time since we've seen the New York-based contemporary artist launch any footwear products to the public, 2022 appears to be the year that he reunites with the Swoosh to release a brand new Tom Sachs x NikeCraft "General Purpose Shoe."

This upcoming silhouette is styled with a minimalistic look and feel, and appears to be intended for casual, everyday purposes. DNA from classic Nike models like the Killshot and Waffle One are present here, the former of which is seen through the overall shape of the shoe while the latter is visible through the mesh uppers, suede overlays and waffle treading. The base is prepared with a creamy exterior and comes complemented by angelic Swooshes, light gray overlays and royal blue hits atop the tongue and heel tabs. Other smaller details on this pair include the debossed Nike heel branding, brown midsole pieces, NikeCraft branding across the insoles and Tom Sachs hits on the interior side of the tongues.

Tom Sachs and Nike have not yet confirmed a release date, but it's likely that these will hit the market at some point in 2022.

In other news, Nike has debuted Flyease Tech for Kids with Dynamo Go sneaker and its Play Pack apparel.