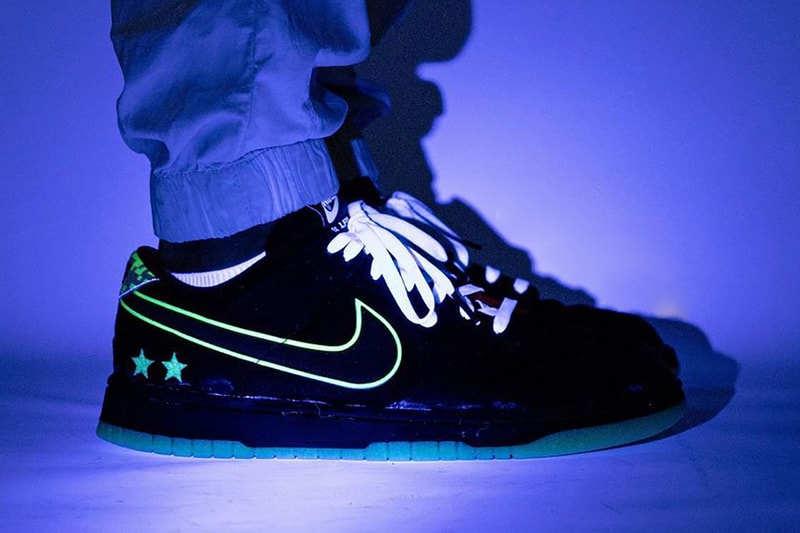 The 2021 finals of the LPL — League of Legends' biggest Chinese pro tournament — are slated to go down in August, and in honor of the festivities, the online battle video game is reuniting with Nike for a special take of the Dunk Low. In 2020, League of Legends partnered with Jordan Brand for a special iteration of the Air Jordan 1 High Zoom which was only given out to winners of the LoL competition, and while no official info has been released about these Dunks, it's likely that they could be executed in the same manner.

For this most part, these collaborative kicks are dressed up in a stark black hue across the upper, but they feature various textures that certainly give them some playful character. Mudguards, eyestays and heels come adorned with a tonal floral print while the quarters get whipped up with snakeskin patterns. Crisp white accents pop out through the stars that are seated on the lateral heels as well on the laces and heel overlays. When the lights turn out, the borders of the reflective Swooshes, parts of the heel and the outsoles turn green as they have glow-in-the-dark capabilities. LPL banners are placed just underneath the tongue's Nike Air logos while the insoles also come ornamented with an embroidered badge.

Peep an on-foot look at the pair up above.

If you're seeking out more footwear news, be sure to check out a look at the CLOT x Nike Air Max 1 "K.O.D. Solar Red".