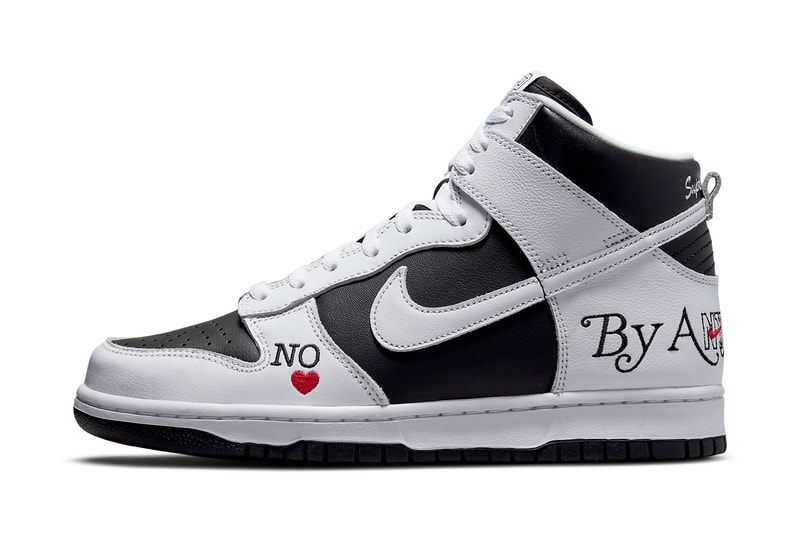 Supreme and Nike's SB Dunk High "By Any Means" is one of the fall's most hotly-anticipated releases, and ahead of its arrival official images of its "Black/White" colorway have surfaced. Supreme's second SB Dunk High collaboration with Nike SB after a now-iconic set of star-covered SB Dunk Highs in 2003, the "By Any Means" features classic two-tone colorblocking and plenty of special branded hits.

Though this high-cut Dunk is indeed an SB, its scheme errs towards the realm of Nike Sportswear. Black leather is used on the toeboxes, quarters and collars, while white leather appears on mudguards, eyestays, Swooshes, heels and collar flaps. Special branding begins on the lateral forefoot, with a "No Milton Glaser's famed "I

Heels present the shoe's boldest duo of embellishments, namely a clever "By Any Means" graphic that combines New York Magazine's flowing font with another altered take on the John Jay-designed Nike NYC graphic. "Supreme Team" is subtly embroidered in white behind the heel tab, and red insoles add a cut-off "Sup" graphic for a final dash of branded flair. White midsoles and black outsoles round off the look.

Though a release date for the Supreme x Nike SB Dunk High "By Any Means" in "Black/White" or its red and blue counterpart has yet to be officially announced, the presence of official images indicates that the style may be releasing in the coming weeks. If the collection follows the precedent set by past collaborations, it'll release on the Supreme webstore first then hit Nike SNKRS a week or two later.