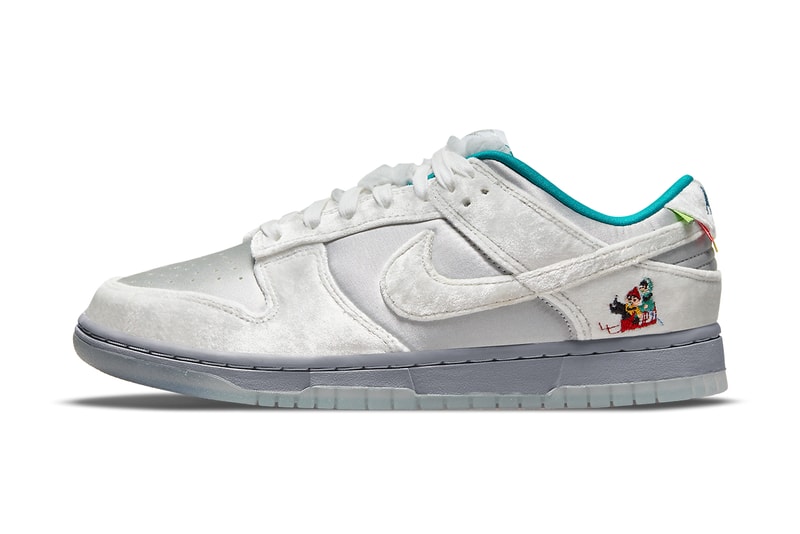 The holiday season is quickly approaching, and in preparation of the Christmas season, Nike is fashioning its popular Dunk Low in a brand new colorway that bears features reflective of a winter wonderland.

The upper's build is reliant on a duo of materials including velvet and a silky satin, the former of which appears in a snowy white hue atop the Swooshes and overlays while the latter is given a silver complexion and is distributed to the toe boxes, quarter panels and collars. To spruce up its season of giving vibe, the Swoosh family adds various holiday-inspired embroidery here including an image of two kids sledding on the lateral heels, a nutcracker-like figure on the medial side and a what appears to be a kid looking to catch a falling ornament on the left shoe's toe box. Additionally, the tongues and the heel overlays have been texturized with angelic fur, the latter of which is also ornamented with multi-colored banners. The interiors feature bright teal lining and insoles that feature a kanji that translates to "ice."

The bottom portions are devised with muted gray midsole units and icy outsoles that have snowflakes embedded into them to further express its wintry motif.

At the time of writing, no release date for these Nike Dunks has been announced yet, but it's likely that Nike will drop these sometime closer to the Christmas holiday.