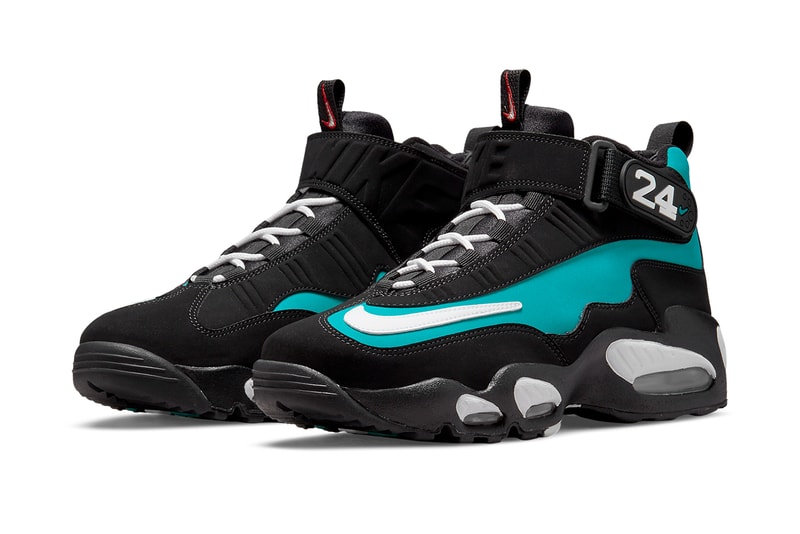 2021 marks the 25th anniversary of the Air Griffey Max 1 — a Nike signature silhouette made for former MLB slugger Ken Griffey Jr. Since the start of the year, the model has been releasing in various colorways both old and new alike, and now it's ready to bring back one of its original variants — the Nike Air Griffey Max 1 "Freshwater" in black.

The last time that this installment was released to the public was back in 2016 — the year that Griffey Jr. was inducted into the Hall of Fame — and it's arriving in identical fashion to its retro release from five years ago. Designed to mimic the palette of his former Seattle Mariners squad, the uppers kick off with a synthetic base that's drenched in its titular shade and comes neighbored by nubuck overlays, tongues, heel tabs and ankle straps that are submerged in black. White accents poke out through the laces, forefoot Swooshes, "24" hits on the straps to nod to his jersey number as well as Nike checks that position themselves on the tongues and heels, the latter also feature features bold red borders. Chunky midsole units and outsoles are also done up in black, the former being decorated with various white pods throughout.

You can find a detailed look here above and note that Nike will be releasing them in the coming week for $170 USD.

For other sneaker news, official images of the Supreme x Nike SB Dunk High "By Any Means" in "Black/White" have emerged.