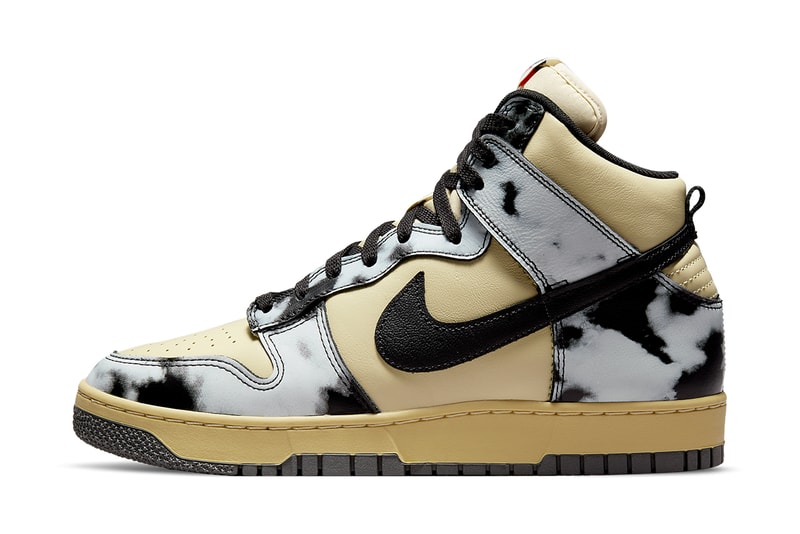 Between all of the products under the Nike umbrella that are both collaborative and inline, there are few that are as strong as the Dunk right now. And while the Swoosh team has been focused on distributing many a different "Be True to Your School" colorway as of late, it's shaking things up a bit and gearing up to drop a trio of Nike Dunk High 1985 "Acid Wash" makeups. And now, the set's cream and black colorway has just been revealed through official photos.

As its namesake suggests it's the tie dye graphics here that do most of the heavy lifting. Overlays that neighbor the throat and wrap around the forefoot and heels are printed with a black and light gray acid wash patterns and these come color-blocked with toe boxes, quarters and collars that are flooded with a solid cream paint job. More notes of black are seen atop the Swooshes, laces and interior lining and a tiny burst of orange is visible through the tongue's Nike checks. Midsoles are given a pre-yellowed look and come finished with charcoal gray treading.

From a constructional standpoint, this model have been modified with a slightly thicker midsole and indented heel to best translate Nike's original Dunk High from 1985.

There's no confirmation as to when Nike will be dropping these, but it's likely that it will hit the shelves later in 2021.

For more sneaker news, check out a closer look at the next UNDEFEATED x Nike "Dunk vs AF-1" Pack.