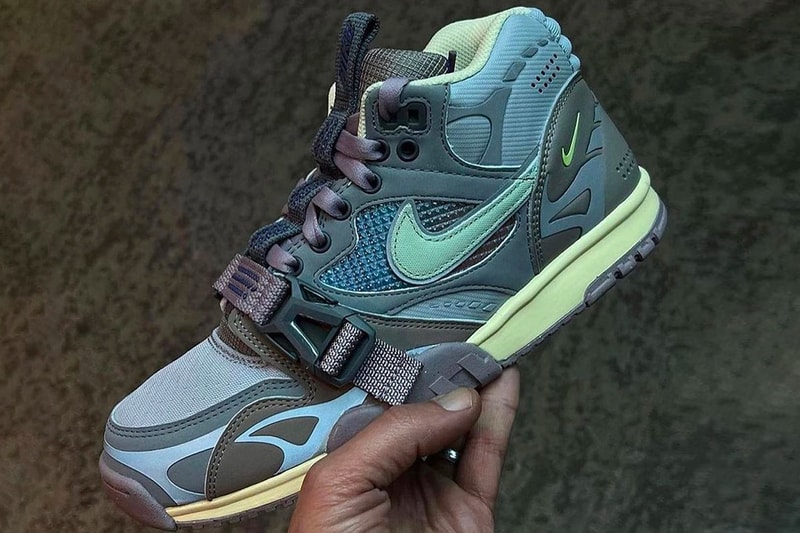 Nike looks to release another Air Trainer 1 SP drenched in a "Honeydew" colorway following the announcement of a variation sprinkled in "Coriander." Previously, the sportswear giant planned to drop a rendition of the pair alongside Travis Scott, but due to the Astroworld Festival incident, the launch of the joint effort has been delayed indefinitely.

Debuted back in 1987 worn by former professional tennis player, John McEnroe, the shoe became the first cross-training sneaker with characteristics to allow one to go from the weight room to sports activities. Thanks to the Instagram page Hichem OG, we got a peek at the upcoming SP edition.

Sporting shades of aquatic tones on the uppers in a mix of leather, synthetic and mesh, a split of gray and brown overlays wrap around the shoe including the tongue featuring a full-length throat pull tab. The midfoot strap and laces are done in an iridescent mauve hue in contrast to the fluorescent green Swooshes found on the laterals. The midsole is divided between yellow and green and sandwiches an Air-Sole unit between a stone gray rubber outsole.

Look out for the Nike Air Trainer 1 SP "Honeydew" to drop in the coming months at select retailers and via Nike.

For more footwear news, take a look at the official images of the New Air Jordan 1 Mid "Washed Denim."