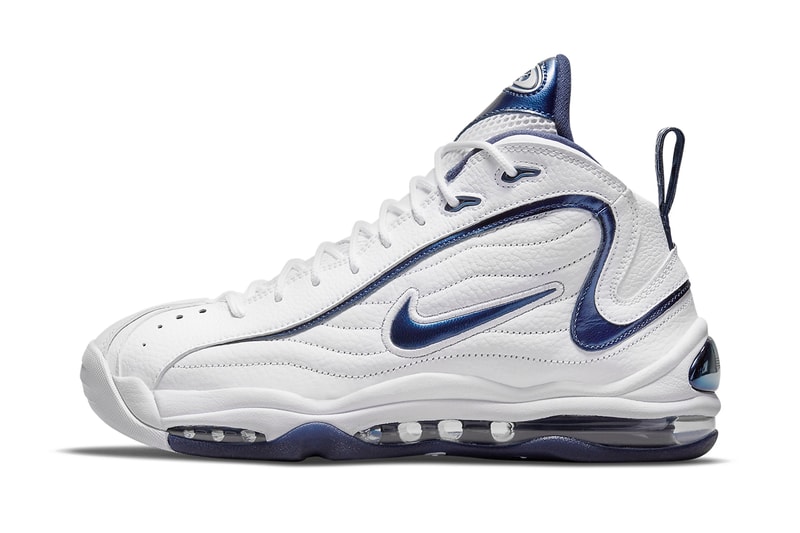 The 1990s was a pivotal time for Nike and its basketball division as many of the most iconic footwear silhouettes were birthed during this era. One of those was the Nike Air Total Max Uptempo — a model that first released in 1997 and was often seen on the soles of NBA legends Reggie Miller, Vince Carter and David "the Admiral" Robinson. After releasing in a Celtics-friendly "White/Green" colorway, the model is now bringing new life to its OG "White/Midnight Navy" iteration.

The two-toned installment is an exact one to one recreation of its OG version from 24 years ago. Its upper build is made up of premium tumbled leather materials and features wavy chiseled panels that run along its lateral and medial sides, all of which are doused in a crisp white hue. Shimmery "Midnight Navy" accents follow suit and touch the Swooshes, tongue overlays, heel tabs, "AIR" molds on the lower heels and the thin overlay that starts on the forefoot and elevates up to the collars. Air bubbles down below are presented with a see-through case and come mated with more navy-colored outsoles down below.

Nike has these available to purchase right now for $170 USD.

On the hunt for more sneaker news? Check out a closer look at the Nike Air Zoom Alphafly "Next Nature."