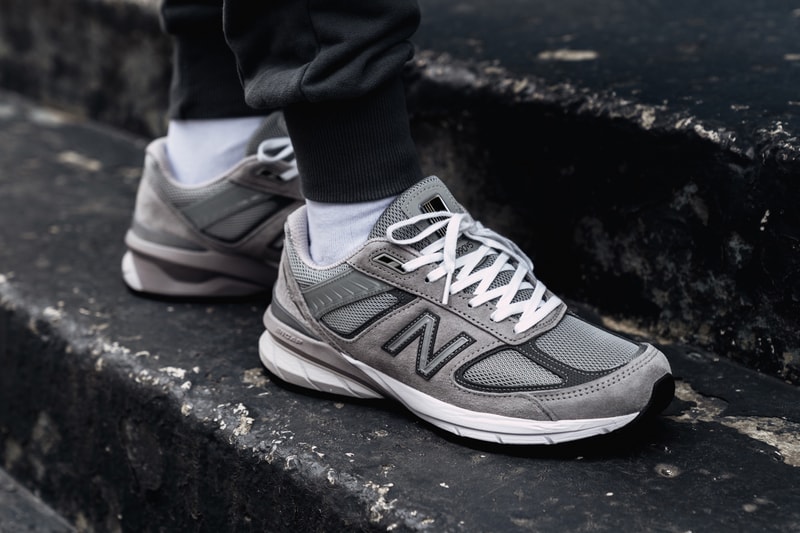 New Balance’s 990 changed the sneaker landscape when it was released almost 40 years ago. A high-performance running shoe, its innovative tech and cushioning instantly made it a hit both on and off the track, and though it was originally made with performance in mind it soon became renowned as a sneaker that walked the line between performance and lifestyle.

In the four decades that have followed, the sneaker has taken on a life of its own, as New Balance continues to update the silhouette through myriad versions and collaborations. “The 990 series defines New Balance, in my opinion. It’s the absolute best of the brand,” says Thomas Lindie, one of the co-founders of New Balance Gallery, an Instagram account and reference point for fans of the brand.

After the release of the first 990 in 1982, New Balance continued to tweak the silhouette, with five versions arriving so far. Each one shows the evolution of the brand’s flagship line, as technology, trends and history all come together. In an interview with Sneakers Mag in 2019, Scott Hull, the designer behind the 990v4 and v5, explained the strategy of updating the silhouette. “Unlike a lot of shoes, we have decided to change the 990 every few years whenever we have the feeling that it’s getting saturated and people are looking for new things,” he said. “When we see that this happens, we want to energize the marketplace with an updated design.”

With New Balance set to begin its 40th anniversary celebrations through an archival release, and the 990’s next chapter recently unveiled, we spoke to Lindie about the sneaker’s history from v1 to v6. The shoe that started it all: New Balance released the 990v1 back in 1982, and the sneaker quickly became known for both its design and its expensive price point, becoming the first ever runner to cost $100 USD (roughly $277 USD when adjusted for inflation). The 990v1’s price point was reflected in its blend of cutting edge technology and Made in USA-craftsmanship, setting the template for future New Balance successes from the off.

Speaking in 2013, New Balance’s chairman Jim Davis explained the challenges of releasing the shoe. “No one ever thought we’d be able to sell a $100 USD shoe,” he recalled. “But it really surprised and it took off right away. It was a great shoe.” The sneaker’s success was partly due to its combination of flexibility and support, a mix New Balance began exploring in 1978. One of the stand-out features was the introduction of a footbed the brand described as “Motion Control Device,” which is still a feature of New Balance designs.

“I think the fact that it was a premium, domestically manufactured, understated, triple-figure price point running shoe made all the difference in a time when other brands were trying to reduce costs and shift production overseas,” explains Lindie. “It’s like they threw everything at it and created this incredible performing running shoe in 1982. Who knew then that, almost 40 years later, we’d still be talking about the same model and it would be as revered as it is today?” It wasn’t until 1998 that New Balance updated the 990, returning with the second iteration of the silhouette. The 990 line had continued over the intervening period -- running from the 995 to the 999 -- but this time the Boston-based brand ripped up conventions and redesigned the original. The technical innovations continued for the 990v2, with the Boston-based brand introducing an ABZORB midsole for shock absorbing, while its overall aesthetic referenced some of New Balance’s contemporary releases. Arriving in 2012 to celebrate the original silhouette’s 30th anniversary, the 990v3 was arguably the first step towards the 990 as we now know it. With pigskin panelling around the upper remaining largely unchanged since its inception, the introduction of a predominantly mesh upper changed the silhouette’s entire aesthetic, making it into a more breathable, lifestyle sneaker, rather than more performance-focused.

“Looking at the first three versions specifically, the biggest thing for me is the difference in how they look from the first to the third,” Lindie continues. “There’s a natural progression there as their design and technical elements evolved through time.”

The ENCAP midsole was given a spruce up that still resembles the 990 today, while a sleek diamond design on the tongue and ribbed’ N’ logo started up a new generation for the silhouette. By 2016, New Balance was well aware of the legend around its 990 silhouette. Returning to the sneaker just four years after the 990v3 had arrived, the label tapped perfectly into a “dad shoe” trend around at the time while also updating a string of design elements from its predecessors.

For this release, the signature “N” logo was slightly enlarged, while the upper’s construction of leather, pigskin suede and mesh was slightly adjusted from the 990v3. Finishing off the design, New Balance kept the focus on comfort and stability, with an ENCAP sole unit and EVA core finishing things off. A year after the release, New Balance recruited Stüssy to create one of the brand’s all-time best collaborations.

“The v4 released in 2016 during the rise of the “dad shoe” as people were growing tired of shoes that looked like socks and the reaction was crazy,” remembers Lindie. “It really seemed to resonate with people who previously would have probably never looked twice at that style. For me, it looked good, it was comfortable, and it was practical. It was everything I needed in a shoe.” In 2019 New Balance launched its 990v5, its most structurally robust take on the silhouette to-date. With a tonal TPU power strap wrapping the upper, alongside the premium pigskin we’d come to expect from the sneaker, the 990v5 was the first iteration to take on the brand’s slightly alternative color palette of “Slate Grey.”

Branding across the sneaker was given a renovation too, with emblems on the tongue and foxing of the footwear accentuated with 360 reflectivity. Crisp white laces and a matching outsole completed a clean take that sat atop the epochal ENCAP midsole.

“I definitely think that it [990v5] looks better overall because it’s simplified,” continued Scott. “I think the detail I like the most is the fact that we can color it up in a way that it looks like a completely different shoe. I think that’s what’s gonna shock people down the road. It’s like “what shoe is that?” Because they don’t recognize it.” Slated to be dropping in 2022, newly-appointed creative director Teddy Santis recently teased images of the forthcoming 990v6 via his personal Instagram account. At first glance, the v6 looks similar to its predecessor with the chunky, multi-layered look we’ve come to expect, although Lindie has noticed a few tweaks upon closer inspection.

“Both silhouettes have a lot of the same elements that feature on the v3 and v4,” he explains. “One of the most noticeable updates for me about the v6 is that for the first time in this line, the N logo doesn't sit on a suede panel, and instead sits on mesh.”

While the 990v6 is expected to be the focus of a number of collaborative releases over the next year, this inline version will arrive dressed in New Balance’s signature grey color palette, with reflective detailing across the upper.

“My initial thoughts of the v6 are mixed,” admits Lindie. “Although I felt the same about the v5 and I still bought it, so you can guarantee that I'll be buying the v6 as soon as it lands. I actually really like the upper, but I'm a little torn about the sole unit as it looks quite chunky at the forefoot and it's also not clear what sole technology it features. I'd love to see an on-foot shot as that's always a great gauge of how a new shoe looks.”