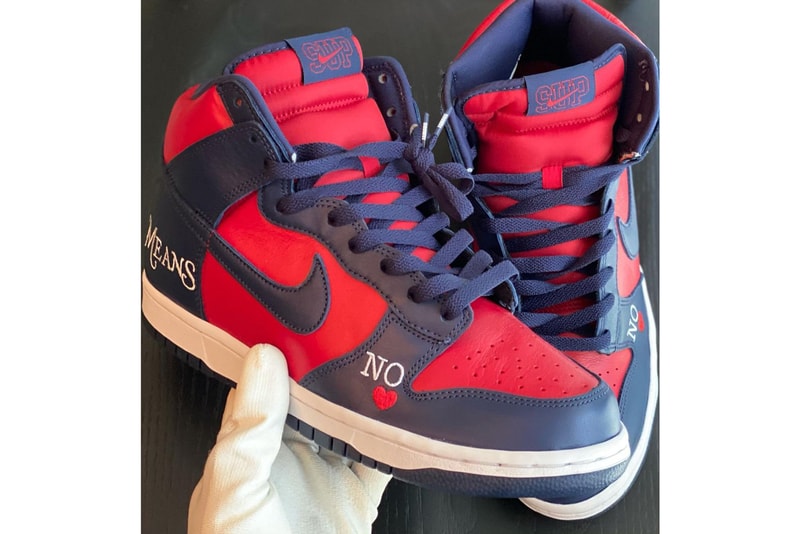 Supreme and Nike's skate-centric Nike SB label sent shockwaves through the world of streetwear in June when they revealed a white and black SB Dunk High collaboration, and now the two's latest co-created SB Dunk High has surfaced in a navy and red makeup. Seemingly equal parts New York City souvenir and letterman jacket, this high-top SB Dunk is big, bold and branded, with special hits placed all around its upper.

Classic two-tone colorblocking that dates all the way back to the Dunk's genesis is used, with mudguards, eyestays, Swooshes, heels and collar flaps offering a rich navy tone while toeboxes, quarters and collars present a bright red. Heels feature a wrap-around graphic that combines Supreme's "By Any Means" motif in a New York Magazine style-font with a chopped-down take on Nike Sportswear's famous NYC logo. "Supreme Team" appears under the rear of the collar, and a "No Milton Glaser's iconic "I

The New York City-based brand and the Swoosh's skate subdivision have worked on a veritable myriad of iconic SB collaborations — SB Dunk Lows in 2002, SB Dunk Highs in 2003 and more SB Dunk Lows in 2012, 2019 and 2021 — but never before have so many Supreme wordmarks appeared on a single shoe; the only previous collaboration that comes close is the Supreme x Nike Air Force 1 High from 2014. As of now there's no hard information on a release date, but these high-cut SB Dunks will likely debut as part of Supreme's forthcoming Fall 2021 range.